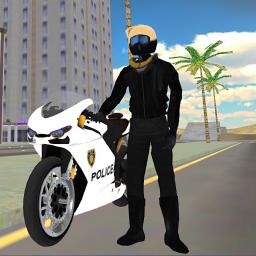 You take the role of the police bike officer and you must go through each level, ridding the city of crime by collecting stolen items like cash bags, drugs, sports cars, trucks, and gold bars by driving through the city and searching for all of these stolen items.

With the open world city environment simulation like Police Bike Simulator 2, you can drive the police motorbike onto stunt ramps to perform exciting, amazing stunts and build up incredible speeds with nitro boosts. If you like to go to extreme speeds and becoming the best police bike officer in the city, fighting crime and serving justice, then you will love Police Bike Simulator 2!