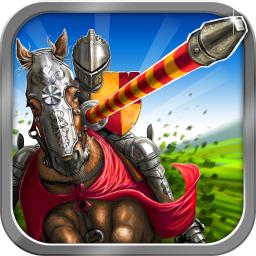 “The graphics on this app are some of the best the mobile world has ever seen.” -- Bullz-Eye (App of the Week)

Experience the speed, adrenaline and lance-shattering intensity of jousting. Test your mettle and push your reactions to the limit on your quest to vanquish rival knights of the realm and become the King’s Champion... a Joust Legend!

It’s 1472 and the King of France has issued a challenge to King Edward IV of England – a grand Tourney to showcase the finest warriors of these two proud nations. And so Edward announces the King’s Trials, a series of gruelling tournaments to find the finest knight in the kingdom!

HONE YOUR TACTICS
Get the edge on your opponent. Pick crucial skill ‘buffers’ before each joust. Make split-second decisions that could swing combat. Do you play it safe or gamble it all on a precision hit?

SUIT UP
Use winnings to customise and upgrade every facet of your knight and horse, from helms and crests to lances, armour, and more. Experiment with different combinations and boosts to see which works best for each duel.

JOUST LEGEND SUPPORTS:
- Original iPad and above, iPad Mini, iPhone 3GS and above, iPod Touch 4th gen and above
- Game Center
- iCloud. Save on one device and continue on another!