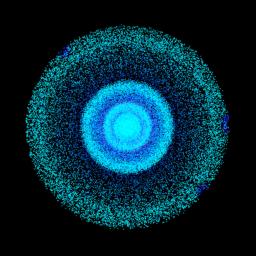 Create beautiful patterns at your fingertips! Particlescape is an interactive particle and gravity simulator designed to be as beautiful as possible and to create an organic link between fingertips and screen.

The rules are simple:

- Touch to generate particles.
- Double-tap-hold to use gravity.
- Shake device to change options.

Sensitive to up to 10 simultaneous touches on iPad (5 on iPhone), the visual possibilities are limitless.

- Generate up to 8000 particles per second per touch. Feel like you're magically summoning particles from the ether.
- Particles in high-density regions are rendered at higher resolution (smaller point size), to bring out finer detail.
- Extensive optimizations throughout to support a maximum of half a million particles on screen!*
- Press harder for more particles or more gravity on 3D Touch-enabled devices, such as iPhone 6s and 6s Plus!